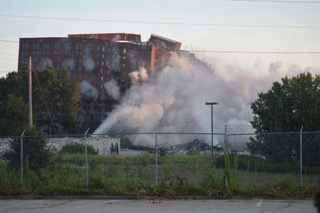 Hartsfield-Jackson Atlanta International Airport (ATL) officials oversaw a controlled implosion that razed the former Sheraton Hotel tower on ATL property Sunday, September 5, 2021. The implosion brought down the 140-foot tall structure that housed a hotel and stood next to a parking facility and the former Georgia International Convention Center. The parking structure was demolished last month through more conventional means, the former convention center is still standing: the walls were used to limit spreading dust caused by today’s implosion. The convention center will be torn down later this fall.

Below is a list of FAQs that should assist journalists in producing stories about the event.

How did the implosion occur?

The project’s demolition joint venture contractor, Renascent/CERM, placed 886.5 pounds of dynamite in 671 holes drilled in supports located on four floors in the building.  More than 4,300 feet of detonating cord was used in the non-electric initiating system. At 7:30 a.m., more than 300 explosions – coordinated to minimize air overpressure and reduce noise – fired off, beginning the implosion process. Once the internal supports were compromised, gravity pulled the structure down in a controlled manner. The detonation to demolition process took 17 seconds.

Why was the structure demolished?

The Airport was responsible for major maintenance upkeep on the 14-story 395-room hotel; ATL officials determined replacing the elevators, escalators, and other major structures in the facility would be cost-prohibitive. In 2017 ATL purchased the hotel, shut it down, and leased it to movie production crews where The Walking Dead, The Gifted, and Mile 22, among others, were filmed.  Demolition of the structure will eventually save the Airport money.

What will the cleared location be used for?

There are no specific plans in place for the 19-acre parcel. The Airport’s Master Plan, completed in 2015 and offering a decades-long blueprint for Hartsfield-Jackson growth, includes the site as part of a potential east end of a sixth runway. ATL’s current efficiency with five runways has delayed the need for a sixth at this time. Any potential plans for future use will be made in close collaboration with Airport neighbors.