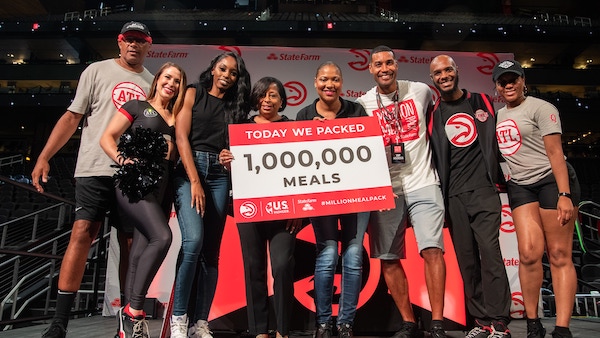 Individuals, families, community groups, schools, churches and businesses gathered on the floor of the award-winning State Farm Arena and packed alongside volunteers from U.S. Hunger and executives from the Hawks and State Farm, reaching a final count of 1,019,232 meals.

The six 90-minute shifts of the event yielded:

“We are very grateful for all of today’s volunteers and extremely proud of the results from today’s Million Meal Pack in partnership with State Farm,” said Steve Koonin, CEO of the Atlanta Hawks and State Farm Arena. “We understand that it is a huge undertaking to tackle food insecurity throughout Atlanta, and we believe that this one-day community service initiative will make an incredible impact and also inspire our communities throughout metro Atlanta.”

“The Million Meal Pack event makes a real difference in the lives of Atlanta residents facing food insecurity,” said Dan Krause, Southeastern Market Area Senior Vice President at State Farm. “Our local State Farm agents and employees were proud to be part of this effort, as State Farm is dedicated to giving back and strengthening communities. We’re grateful to all the volunteers and thank State Farm Arena and the Atlanta Hawks for our partnership.”

Statistics provided by the Atlanta Community Food Bank show that nearly one in eight Georgians are living with food insecurity, including one in six children.

“There is nothing like the energy from 5,000 Atlantans coming together to take care of their community, taking a bold stand in the fight against hunger. After three years of being apart, we’re honored to be invited back by the Hawks and State Farm to help pack one million meals for families in need!” said Rick Whitted, CEO of U.S. Hunger.

As part of accomplishing various packing milestones throughout the day and after completing a lone volunteer shift, attendees celebrated on State Farm Drive with games, refreshments, music and fun.

Continuing to operate as the world’s first TRUE Platinum certified sports and entertainment venue, this event is also marked as the first zero waste Million Meal Pack. As part of this event, State Farm Arena diverted more than 90 percent from landfills that includes all materials generated from load-in to load-out. In an intentional effort, the packaging also uses messaging to encourage recycling within the recipients’ communities.

The Hawks and State Farm hosted their first Million Meal Pack in 2019, where more than 5,000 volunteers filled State Farm Arena and prepared more than one million meals. The meals were then distributed to local Atlantans through seven community food bank organizations.

Additionally, both organizations have led efforts in multiple community-focused initiatives to better serve metro Atlanta. In addition to Million Meal Pack, the two organizations have collaborated on high-impact endeavors such as providing free pop-up grocery stores in partnership with Goodr Inc., for elderly and underserved citizens in metro Atlanta and enhancing the Snack Pack Program, which gave over 24,000 snack packs to youth throughout the school year and during summer break.

As part of the 2021-22 regular season, the Hawks Foundation and State Farm presented a check of $122,000 to the Atlanta Community Food Bank as an effort to help combat childhood hunger and fight against food insecurity throughout metro Atlanta.

The ‘Good Neighbor Giveback’ campaign raised $100 for every point the Hawks scored over 100 in each game during the 2021-22 regular season (originally up to $100,000) and was generously extended from State Farm.To learn more about the work that the Hawks are doing in the community, visit Hawks.com/community.